In January 2019, the Pavers Foundation donated a life-changing grant of £2,000 to Peeps, initiated by our Pavers colleague, Vicky Starkey. Vicky is passionate in supporting the charity Peeps, who provide invaluable support to children and their families affected by Hypoxic-Ischemic Encephalopathy (HIE); similar to her nephew Henry and sister Katie.

Hypoxic-Ischemic Encephalopathy (HIE) occurs before, during or shortly after labour, where the brain is starved of oxygen and blood. HIE is not a well known condition, but can affect 4 babies in every 1,000. Peeps works tirelessly to raise awareness and provides valuable support to new families directly impacted by this.

Peeps is the first charity in the UK dedicated to supporting newborn babies and their families directly affected by Hypoxic-Ischemic Encephalopathy (HIE); a form of birth trauma which can lead to severe and complex medical disabilities. Established in early 2018, it has already helped many families impacted by HIE, and received an overwhelming response from healthcare professionals who treat children on their HIE journey.
There are 150 neonatal intensive care units across the UK, on average every unit per month treats a baby affected by HIE, as such, this equates to 1,800 babies and their families per year.
Peeps has a goal to reach out to a quarter of these families with 450 special parent packs, bundled with information leaflets, journals and essentials to help parents through long hours in hospital wards. Further to this, they aim to help around 45 families to access funds for counselling from specialist services experienced in birth trauma.
There are further plans for a buddy support system, initiated by volunteers with experience of HIE, starting from the very start of a parent’s HIE journey. This will take place in face to face meetings and via online platforms too. Further help takes the form of contributions towards the cost of hotels during emergency hospital visits, and childcare support for the siblings affected by HIE.
Sarah, the co-founder of Peeps, was frustrated with the lack of support at the start of her daughter’s journey:
“The early days were a bit of a blur, and we had very little support - the doctors and nurses were great but we couldn't get our heads around what had happened or what the future had in store for us. Thankfully I stumbled upon a Facebook group - it was just for parents who had gone through what we had. Thanks to that group, we have made friends with some amazing people. However, what happens to those mums and dads who aren't on Facebook, or don't find the group? It’s also only for parents and from our experience, HIE can significantly impact grandparents, siblings, friends and families. Our aim is to reach out to anyone affected by HIE, and to let them know that they aren't on their own." Sarah Land - Co-Founder & Chair of Trustees

We met up with Vicky to learn more about how HIE has affected her nephew Henry and sister Katie, and how Peeps can make an amazing difference to families just like Vicky’s... 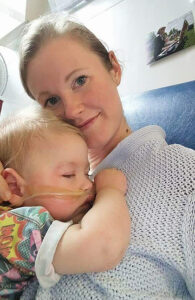 Katie with her son Henry

“When I heard the news that my sister, Katie was going into labour, I was elated and crossing my fingers that the birth would be quick and easy, and I would be soon meeting my new nephew. That is not in reality what happened.
Due to several reasons, Henry was starved of oxygen in the womb, he was born with immediate and life-threatening injuries.
Driven by ambulance to a specialist hospital, Henry was placed in an induced coma for over a week, with attempts to wake him resulting in seizures. When he did start to wake he was given medication to suppress his seizures and it soon came to light that he did not have the ability to swallow.
It was difficult to comprehend at the time what this would mean for Henry, his family and their future, this uncertainty was particularly frightening. I strongly believe that this experience would have been made more bearable if Peeps was around during the time of Henry’s birth.
The issue with HIE is that it is not classified as an acquired brain injury, meaning that brain injury charities were unable to help Henry and his family. At such a dark and desperate time, Henry’s parents felt very isolated and helpless, as a family all we wanted to do was help in any way that we could.
When Henry was born, our family was in a state of panic and grief. I found myself constantly googling ‘what happens to children starved of oxygen?’ The future for Henry and his sister, my sister Katie and my brother-in-law was a complete unknown and utterly terrifying. Reading the list of support Peeps aims to provide is very comforting, it is everything that we could have wished for at the time of Henry’s birth and offers strong hope in terms of his future. 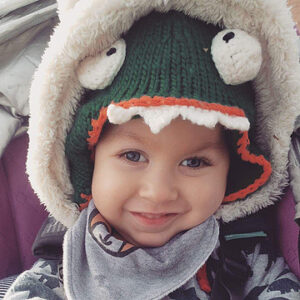 Henry spent the first 20 months of his life in hospital, but he now lives at home with his two sister and is cared for by Katie, her husband and six nurses. His condition now means he needs round the clock care.
If my sister did not have access to Facebook she would not have had the chance to join groups where help and support is accessible 24 hours of the day. From these groups Katie has formed close friendships with those similarly affected by HIE, where they share highs, lows and the everyday difficulties that a child with complex medical disabilities goes through. With the help of Peeps, this online support forum is only going to expand.
Peeps is such an important charity that deserves a chance to help families just like mine. Babies like Henry need their family to be strong, supported, and guided; so that they can have the best start possible.
I am thrilled that the Pavers Foundation has enabled me to contribute to Peeps, I know that this donation is going to help families like mine in their time of need, I look forward to seeing the charity develop and evolve.”
Keep up-to-date with the latest news from Peeps by clicking the links below. We know that 2019 will be an amazing year of achievement for Peeps.
Website | Facebook | Twitter